What About Art Residency, Mumbai 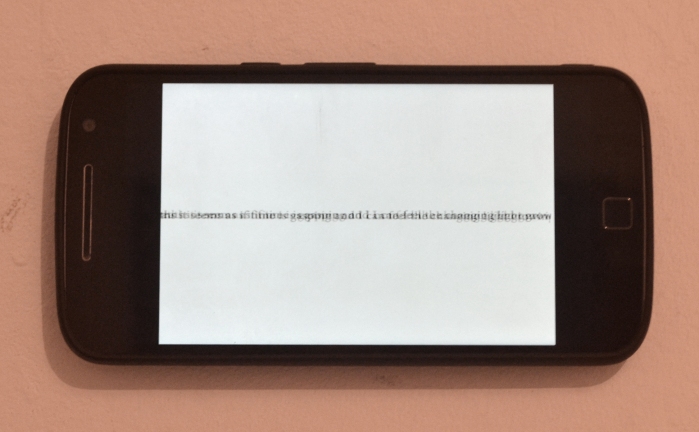 The video consists of my three poems scrolling back to back, the font is kept small to make the viewer go closer and read. The scrolling speed is faster than the normal, at a speed where one can still try to read but loses the flow, and tries harder to catch the thread of text only to lose it again and again. This work is a take on the tendency to comprehend everything by catching it within the parameters of logic, but this results in losing the emotions/sensibility a certain thing is capable of creating. A text is always meant to be understood, but here the reader creates a sense of the text from the fragments s/he is able to capture between the flow. It is the in-betweenness/mean while of the text which is important and creates different meanings depending on which words each viewer is able to grasp.

This video was displayed on a wall, which restricted the viewers from pausing the thread of text; it is meant to be seen in the same way without interrupting it. Since here you will be given access to the video file, there is nothing to restrict you from the temptation of finding the full meaning by pausing and reading it. This adds another layer to the work by asking the question to the viewer: how much one can refrain from this human tendency of finding meaning? Can we allow the work to convey something more than its concrete meaning in terms of emotions, feelings and experiences?