‘What common perception trivializes and misses, an artwork apprehends in its irreducible essence.’ – Levinas

In these present volatile times, where each moment is a struggle for survival and one gets entangled in monotony, how can a slight shift, a soft utterance, a temporary happening change the course of our obsessive routine?
As part of my residency at O.P. Jindal Global University, I did an instruction-based project- Occurrences which renders the mundane space through a process of sending instructions; thereby inserting events and creating experiences to stir human monotony. Here, the BA students were the participants and received instructions through e-mail; in the beginning I sent the same instruction to everyone and later sent different to each student. The context of the instructions was to make them alter the environment of the common studio space, using the tangible objects in the studio as well as mutating the intangible elements, like light, sound, touch, smell and affect of the space, among others. The studio space served as a material, arranging, re-arranging, adding, subtracting, juxtaposing elements and altering it as per the instructions.                                                      The meaning of each instruction got multiplied through various interpretations of the words, accumulating with every occurrence, by the students. The instructions are a trigger for the occurrences, which essentially are an insertion in the memory of a person rather than a physical occupation. The final exhibition included a range of media, which were primarily a collage of documentation of the process, standing as witness to the events experienced by the students.

The immaterial is touched and activated while gathering experiences and holding the traces of the past. The intention of occurrences is not to reach at a conclusion, but to speculate and linger around these inserted hybrid chain of events, to be conscious of their crucial role in life. Through this project, I slowly gravitate towards a withdrawal from the tangibility of an art object, into an accumulation of intangible experiences. It uses the possibility of change/happenings in routine as a tool for defamiliarization. Also, the emphasis on an inserted event/change at the same time re-emphasizes the importance of a monotonous life/continuity and brings it to the foreground of consciousness; It maintains that the ordinary enables the extraordinary, while the unusual delves on the usual. My role fluctuated between an artist and a curator, and the line became almost non-existent. This project challenged and gave rise to many questions: where is the line between art and life? Can something so intangible as an experience be collected? What is my role and where does the ownership lie when others are contributing in the process?

Looking for the Profound in the Ordinary – Reflections from Sonam Chaturvedi’s Art Exhibition ‘Occurrences’ at Jindal Global University by Asmita Singhvi, University of Oxford. Read here

The project commenced with the first instruction:

Response: Two students sent a video, silently moving the chairs and tables and stacking them at one side.

Response: a photograph of barbed wire and text explaining what she feels about boundaries.

For this instruction, I chose to capture barbed wire on a wall. Be it borders, barbed wire or any form of partition – they all, in my opinion, act as perfect symbol of divide. Most times borders depict political boundary as opposed to geographical boundary. While the intention may be to create an equal or just spaces, more often than not it results in an environment brewing with fear and competition.

Response: A student sent a video of making the space intimate by reciting and repeating a line of a poem. Thus, she leaves the poem with her voice in the space. The line is ‘There is a blue bird in my heart that wants to get out’ by Charles Bukowski.

Response: A girl sent a poem.

What I leave behind??

An act of concealment. The smoke with my favoured daisy.

With my conscious. I leave the Ashes.

What I do not leave behind??

A tiny unburnt piece of that burned imperial.

To kindle most of it? Carry a bit to accompany me?

The above poem was printed on an imperial sheet and displayed.

Response: Two girls responded through a simple gesture and became one with the space by leaving hair, a body part, in the space. They documented the act through a GIF-

It was displayed with the cut strand of hair. 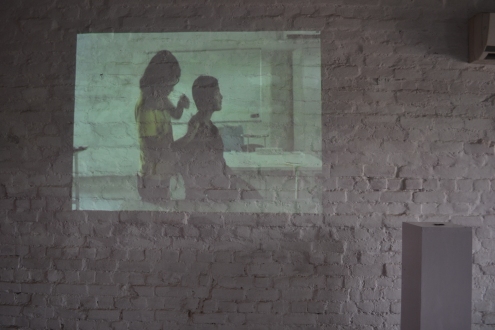 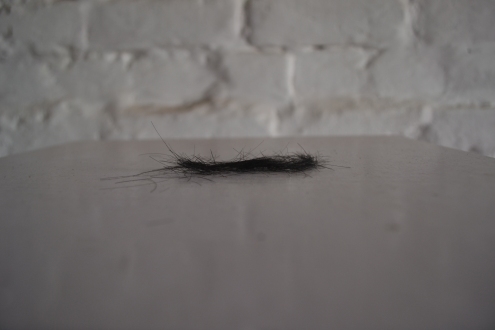 Response: A student made a graffiti in the space with her name to mark her presence and make it intimate-

Response: A girl sent a video of herself standing off-centre and screaming to create this centre, her centre.

Instead of displaying the photograph I decided to recreate the installation in the exhibition, with the books written by dead authors and a dysfunctional clock (below)

Response: Photograph showing an archive of things which dry, decay and die.

Response: A girl sent a music video of herself performing in the dark, shrouded by a sheet of cloth. She is the hidden sculpture. I took frames from the video and displayed them as a photo-performance. 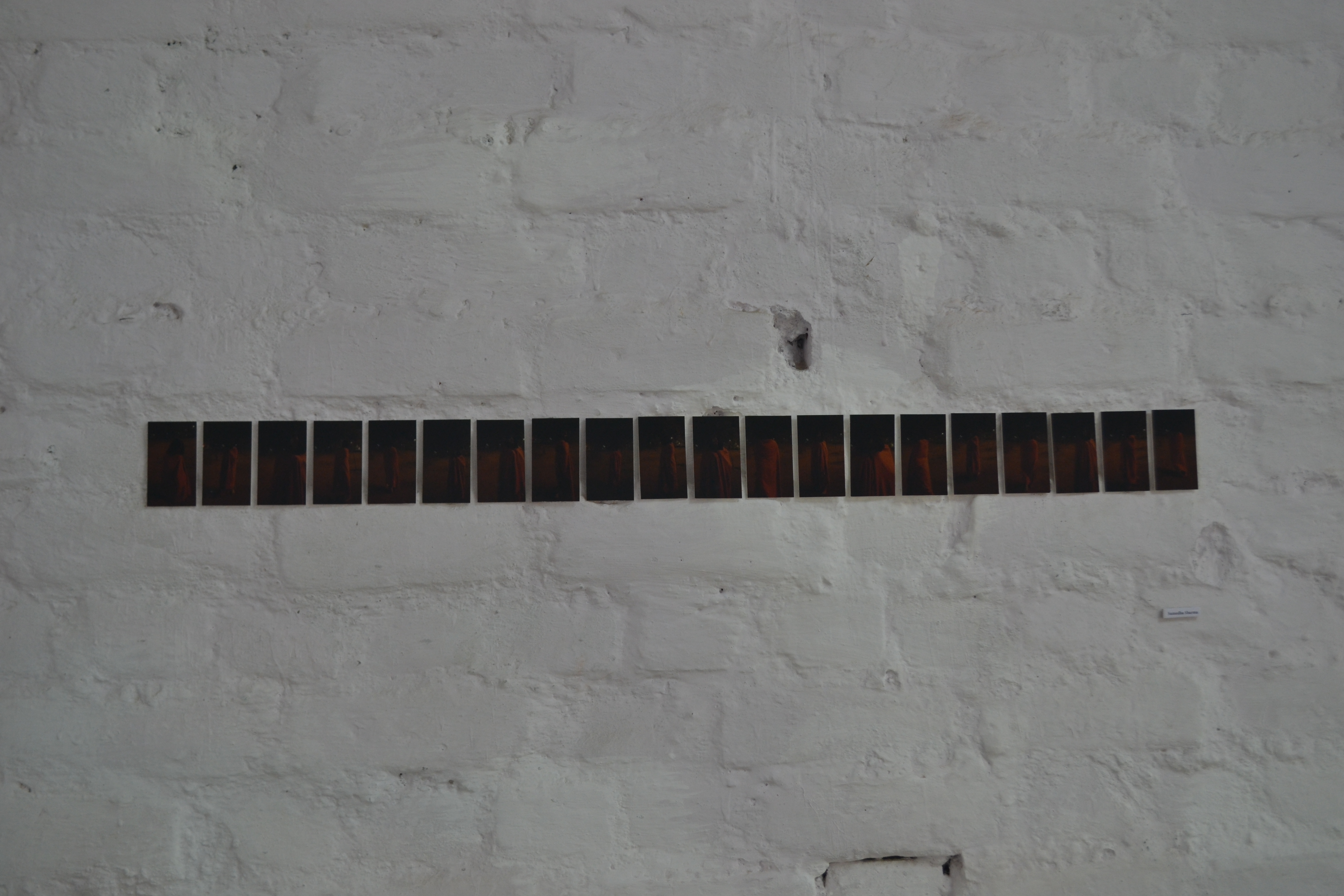 Response: A girl responded to this instruction with the photo of this lady with flower and how she felt through the encounter/occurrence. 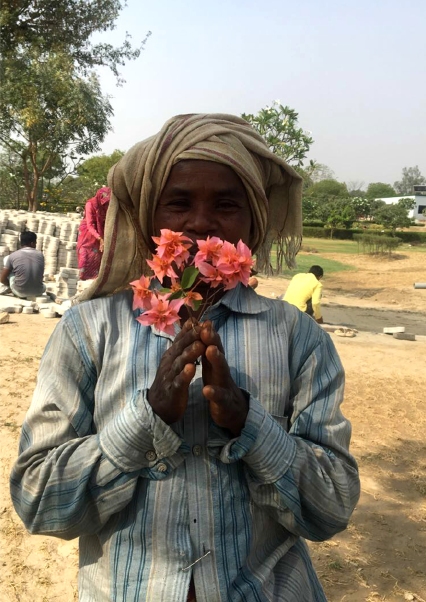 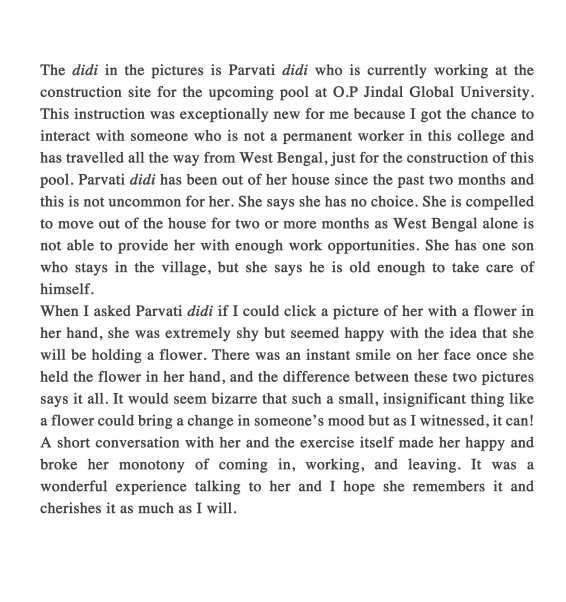 Response: One student took a photo and another responded to the above questions with reference to the photo. 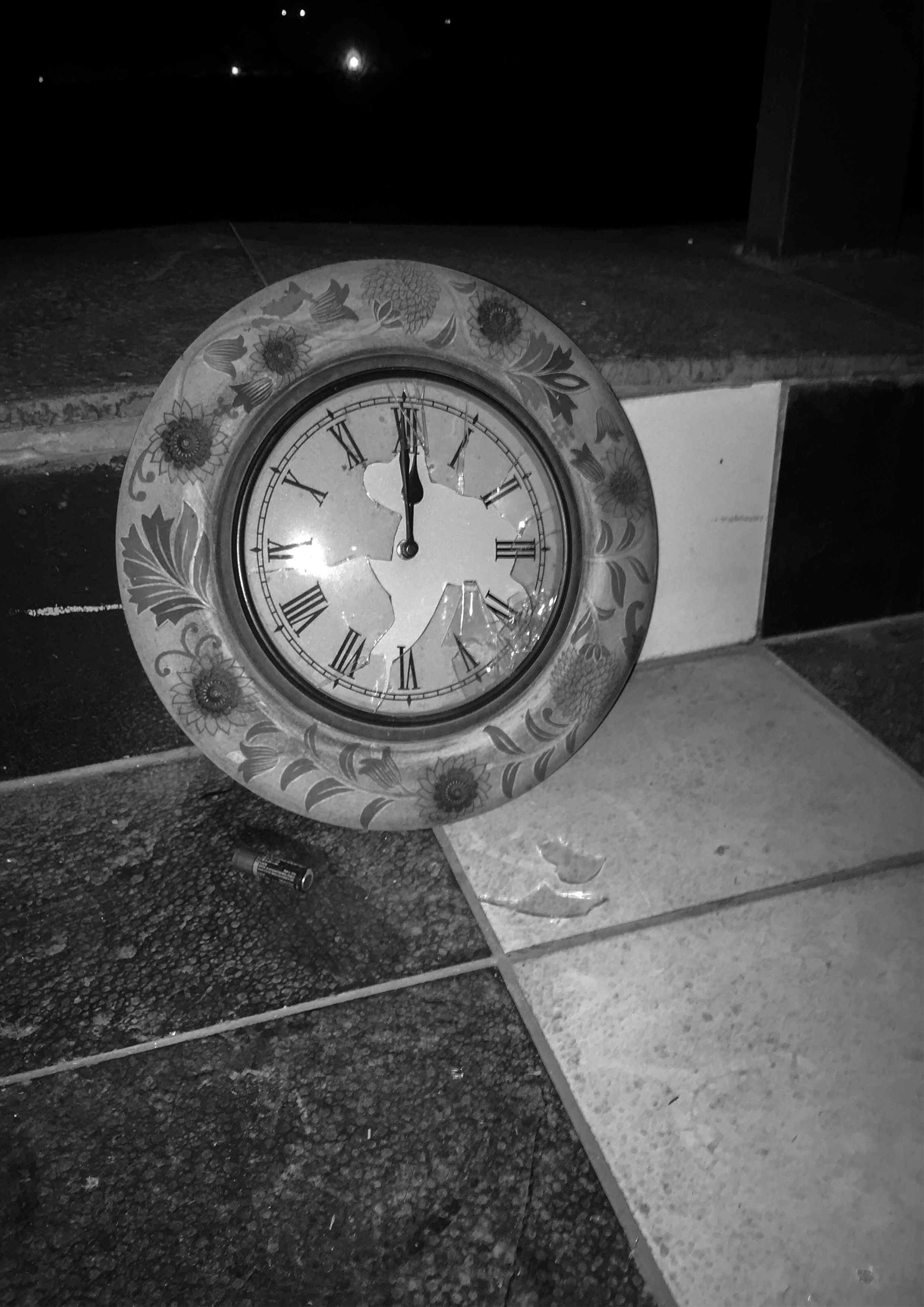 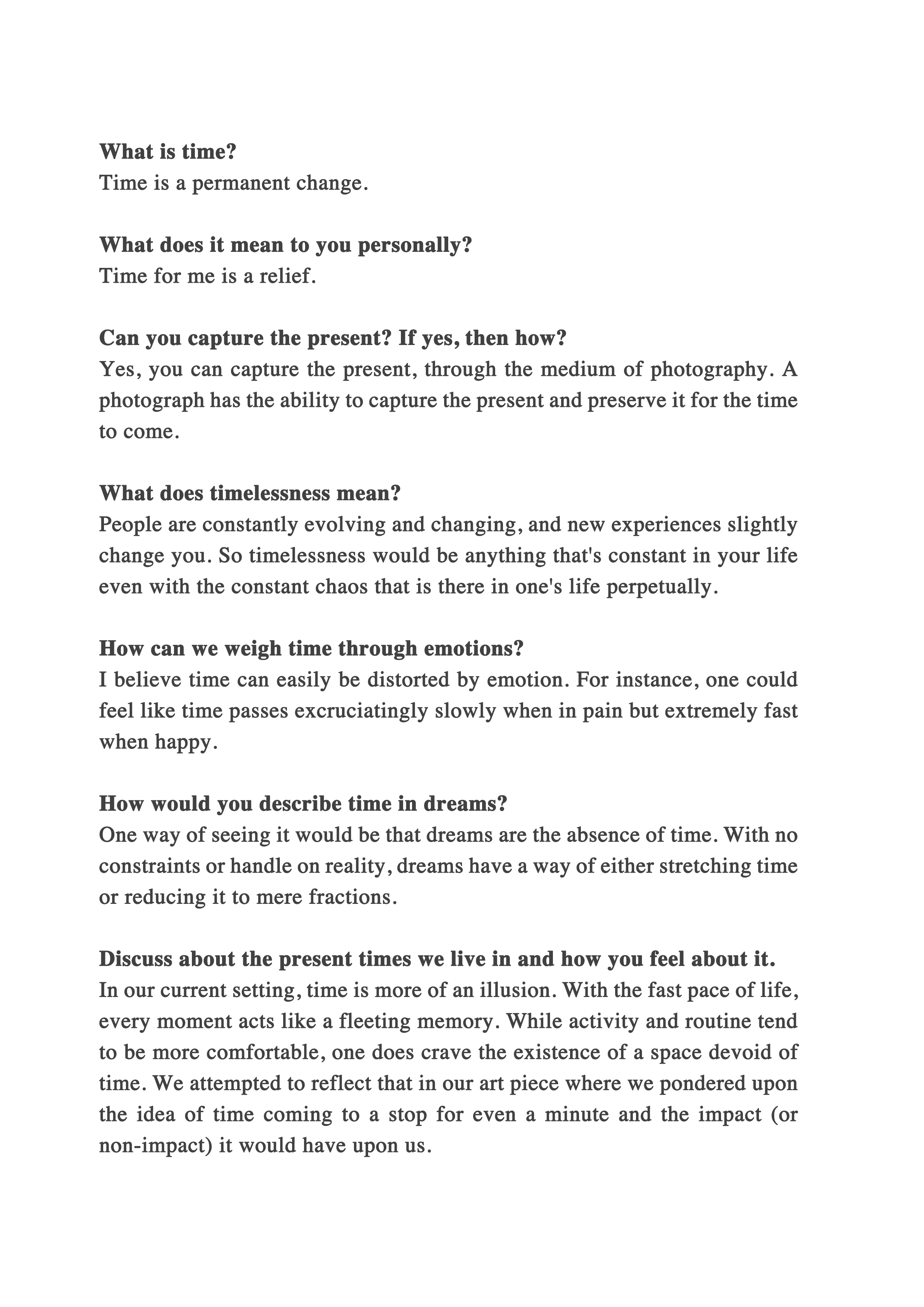 Images from the display: